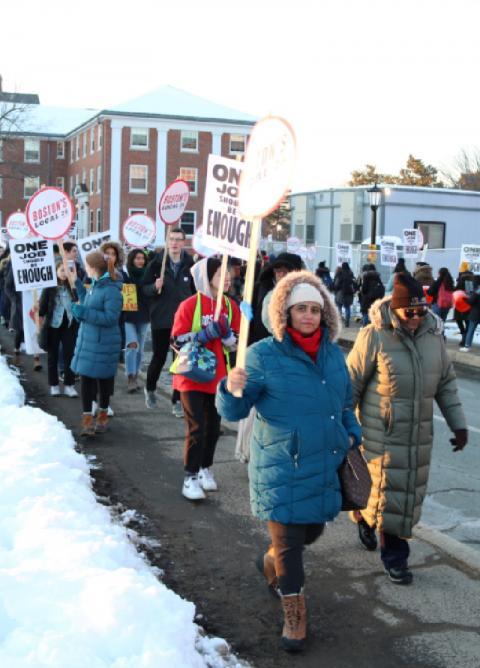 In New England, colleges and universities are some of the largest employers of food service workers, who prepared and served close to 87 million meals annually prior to COVID-19. As a result of the pandemic, many dining staff, such as cooks, dishwashers, and cashiers, were either laid off or quit in 2020. As higher education institutions prepare to welcome students back to campus for the 2021-2022 school year, and continue to grapple with changing dining needs, they are also facing serious labor shortages.

The working conditions for dining staff play a significant role in whether employees return to food service work. Whether dining services are self-operated or maintain contracts with food service management companies, universities and colleges have the power to create fair working conditions and represent workers’ needs in their contracts. While hourly wages for campus food service workers have increased almost 6% this year from 2020, the question still remains as to whether this increase adequately addresses workers’ needs. FINE takes a closer look at these working conditions and lessons we can learn not just from the pandemic, but the history of labor actions among university dining workers.

Across the country, millions of workers in the foodservice industry have reached their limits, refusing to return to jobs with negligible worker protections and benefits as the Covid-19 pandemic persists. Concerns over low wages, minimal healthcare benefits, and exposure risk to Covid-19 are driving food service workers to make a statement about the poor working conditions at restaurants and in other foodservice and hospitality industries. While the pandemic adds new safety concerns in the workplace, foodservice workers have struggled with many of these other issues for decades.

Below are several examples of when university dining employees organized for higher wages, stronger job security, and better benefits.

When the Yale administration announced they were planning to subcontract campus food services, dining staff became concerned about their job security. Workers brought these concerns to their contract renewals, and unionized dining employees (Local 35 of the Federation of University Employees) and the administration began discussing new terms that would satisfy both parties’ interests. However, discussions were stalled over the administration’s insistence on subcontracting food services, and this moved the dining staff to authorize a strike. For over a year, dining workers and custodial staff went on two strikes while representatives from their respective unions continued to negotiate on their behalf with the administration. The strike came to an end when the administration and the union bargaining committee reached an agreement that pleased both parties: a ten-year job guarantee for union employees, a 2% annual pay increase for dining staff, and protection for the university  to subcontract all campus food operations except dining services.

In 2009, dining workers at Brown presented a set of new terms to the university administration to include in their contract renewals, such as wage increases, retirement plans, and healthcare benefits.  After months of negotiations and repeated contract extensions to accommodate these discussions, close to 200 unionized dining staff (represented by SEIU, Local 61) voted to go on strike to prompt the administration to agree to their terms.The prolonged discussions specifically revolved around dining workers’ demands for retirement plans and healthcare benefits. However, the workers’ decision to authorize a strike sped up the negotiation process, and the administration and workers reached an agreement before a strike could occur. This new three-year contract eliminated the wage freeze and instead included an annual 2% wage increase, retirement plans, and more full-time positions for existing employees.

When it came time to renew their contracts, dining hall workers (represented by local UNITE HERE Local 26 Union) negotiated with the university administration over pay, healthcare benefits, and job security terms for over three months. The union-represented workers and the administration were not making any progress in the discussions so the employees voted to go on strike until the university began to make serious compromises. The strike received national media attention and lasted 22 days while negotiations continued. The bargaining resulted in a ten-year contract that set a minimum salary of $35,000, charges the cost of healthcare co-payments to the university, and compensates employees during the summer break, when many employees are out of work until the fall.

While not legally mandated to offer employees a shift break, universities can decide to offer their staff a 15-minute rest period, which must be compensated. When student dining workers at the University of Maine saw that they weren’t getting paid during their university-offered shift breaks, they raised this violation to the administration. After hearing feedback from students about their experiences working on campus, the administration decided to pay $75,000 of retroactive wages dating back two years to over 900 students who weren’t paid while on break. As of this writing, students receive wages for their shift breaks.

Inspired by the momentum of the 2016 Harvard University strikes, over 300 unionized dining service employees at Northeastern University (represented by local UNITE HERE Local 26 Union) voted to go on strike after five months of discussions with Chartwells, the food service company contracted at Northeastern. Employees were demanding higher wages and stronger benefits in their new contracts with Chartwells. While the strike was primarily aimed at applying pressure to Chartwells, unionized workers were also asking that the Northeastern administration play a more active role in the contract negotiations. However, the strike was averted. Chartwells agreed to the workers’ contract terms, which included not only salary minimums of $35,000, pension plans, and better healthcare benefits, but clearly defined language about identity-based worker protections in the contract.

After organizing a union in the Spring 2018, Tuft dining workers presented the administration with a list of desired benefits and concerns to address in their new contracts for the new school year. After the administration denied their terms, the workers rallied and protested while their union representative continued negotiations with the administration. The workers voted to strike in March 2019 but before the strike began, the administration and the workers reached an agreement. This tentative agreement included affordable healthcare, increased wages, and opportunities for temporary workers to become permanent workers.

The Role of Unions

Despite low numbers of union membership and representation in the foodservice industry, the above examples show how unions have stepped up to advocate for their members to ensure that dining staffs’ contracts reflect their interests. It’s not a coincidence that unions were game-changing to most of the negotiations listed above. Unionized workers have been found to have higher wages and more healthcare benefits than their non-unionized peers in the same line of work. Unionization is founded on workers coming together to represent their needs to their employers because more often than not, food workers are overworked and undervalued. Moving towards a democratic and just food system means supporting workers when they hold their employers accountable.

The Role of the Campus Community

It’s important to note that the support and solidarity from students, staff, faculty, and other members of the campus community were integral to the gains and compromises of these agreements. In some instances, even city councils extended their support for the striking workers and Mayor’s offices became involved in the negotiations. Joining rallies, sending around petitions, raising media attention, donating to strike funds-- these are just some of the actions taken by community members during the protests listed above that helped shape better working environments for dining staff.

What can you do?

Whether you are a dining staff worker yourself, another member of the campus community, or interested in regional food systems, here are some ways to support labor organizing in the campus food system:

Food workers are vital to our food system, which makes their needs and interests vital to any work towards a sustainable future.  As we strategize to leverage the power of institutions, we need to recognize, uplift, and support the work of food service employees who are shaping a fairer regional food system.

Megnot Mulugeta is the Farm & Sea to Campus Program Associate with FINE and a graduate student at the University of Vermont’s Food Systems program. With a background in community and urban farm programs, she is excited about broadening her understanding of food systems to include the role of institutions in regional networks. Prior to attending the University of Vermont, Megnot was living in her hometown of Nashville, Tennessee, working at a food access organization and a grocery store. She has a Bachelor’s degree in Sociology and Africana studies from Barnard College. In her free time, she enjoys fantasy novels, making music playlists, and baking.