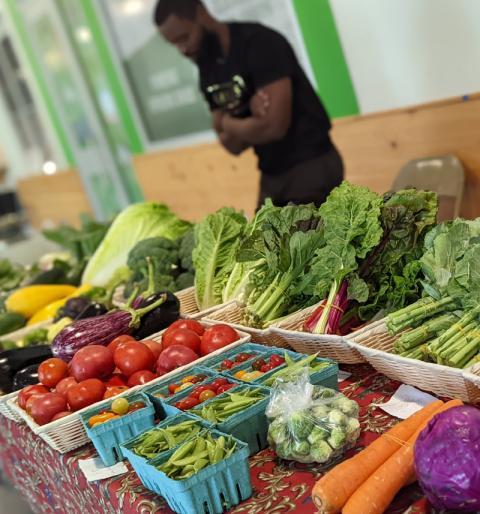 Over the past year, the research team of the New England Feeding New England project has been analyzing what it would take for New England to produce 30% of the food its residents eat by 2030. Researchers are exploring this from several angles including production requirements, dietary needs, and market demand. The market demand team is looking at the role of a variety of markets, including institutions. American Farmland Trust and Farm to Institution New England are both represented on the market demand team and have been working over the last year to understand the potential for New England markets to purchase regional food. This spring, new data was released by USDA that have helped us understand not just the size and scale of some of these markets, but how they have grown and where gaps remain on a state-by-state basis.

Every five years, farmers are asked by USDA National Agricultural Statistics Service (NASS) to report on their production and sales, including what they sell through various market channels. NASS’s 2020 Local Food Marketing Practices (LFMP) survey reveals the most recent trends around direct-to-consumer markets which includes farmers’ markets, Community Supported Agriculture (CSA), and farm stands; intermediate and institutional markets like institutional purchasing; retail sales to grocery stores and restaurants; and wholesale to other regional processing and distribution channels. The survey was conducted by NASS for the first time in 2015 and then again in 2020. Results, which were released in 2022 present the first opportunity for comparisons in both growth and decline in these markets. This brief will focus on the direct-to-consumer sales and intermediate and institutional sales. FINE reported on the results of the 2015 survey in 2017.1

In 2020, New England farms reported over $900 million in sales through these markets, with roughly $388 million through direct-to-consumer markets and $511 million through intermediate and institutional markets. This marks a more than 20% increase in local food sales from the 2015 survey, while the number of participating farms increased by less than one percent.

While local food outlets typically represent a relatively small portion of overall agricultural sales, this amounts to approximately 33% of all agricultural sales reported in New England in the most recent Census of Agriculture (2017). With the exceptions of Hawaii and New Jersey, no other state in the nation comes close to achieving this level of local food market share.

This alone is something to hang our hats on. New England’s limited agricultural land base hinders our ability to access major commodity markets, and is one of many reasons why building local and regional food supply chains is critical for our region. But well-developed local markets don’t just happen without enormous work and investment often over the course of decades, and many states are just now seeing the benefits.

Direct to Consumer Sales by State

Intermediary and Institutional Sales by State

Maine farms contributed nearly half of all intermediate and institutional sales, valued at $245 million. These sales represent more than a quadrupling of growth for the state since the 2015 survey, indicating either that Maine’s intermediate and institutional markets were able to rapidly expand during this period, or the survey was able to reach a much more robust farm sample in 2020. Regardless, Maine’s intermediate and institutional sector is undoubtedly driving significant economic growth in the agricultural and food sector, from which the remaining New England states can take their lead. Massachusetts farms sold $103 million in this sector, while Vermont, Connecticut, and New Hampshire farms followed close behind (see chart).

Nearly all states experienced growth in these markets as well, however, a 56% drop in sales between 2015-2020 in Vermont remains the lone example of market decline in this sector during this period. While little explanation is readily available from the LFMP survey itself, it is possible that commodity market volatility reduced the state’s capacity for providing wholesale products like milk and cheese, or contracts to schools and universities were disrupted during the survey period.

It’s important to note that the 2020 LFMP survey was conducted in the first year of the COVID-19 pandemic, which upended consumer behavior across nearly all sectors. Institutional and retail markets may have felt this most directly due to school and university closures and a sharp decline in food purchased at restaurants. However many farms in the direct-to-consumer sector did not indicate in the survey that their sales were negatively affected – in fact, many rose to the occasion with increased online and other direct sales, a novel local food channel which will likely be here to stay.

In addition to the state-level information above, more detailed survey results are also available at a regional level, which in this case includes the full Northeast - the six New England states, Delaware, Maryland, New Jersey, New York, and Pennsylvania. These Northeast regional trends can shed light on similar trends that may be occurring in New England, and highlight which markets may require further work and investment to expand. Across these 11 states, intermediated and institutional markets comprised nearly 44% of all local food sales, direct-to-consumer markets comprised 36%, and retail sales to grocery and restaurants comprised just 20%. However, NASS indicates that far fewer farms report sales in institutional markets than intermediated markets, so it’s likely that these wholesale distribution and processing channels are far more robust than direct pipelines from farms to schools, hospitals, and other institutions. In order to learn more about farm trends in the institutional sector, it is likely that far more farms would need to participate in these markets for their data to be disclosed by NASS.

Research happening across the region shows that institutional market channels represent a huge opportunity for the viability of New England’s small and mid-sized farms. These markets tend to be more stable and consistent than other commodity markets, and have the capacity for much higher product volumes than farmers markets or farm stores.

These market channels require work on both the supply and demand ends of the chain. Four million New Englanders, or 25% of the region’s population, spend time in one of New England’s 20,000 institutions every day. These residents rely on schools, hospitals, colleges, early care sites, correctional facilities, and other institutions for employment, food, housing, healthcare, and education. Many residents rely on institutions for multiple—and in some cases all—daily meals. This level of reliance makes the institutional sector a critical area of focus for building a resilient and equitable regional food system. Farm to Institution New York State (FINYS), an initiative of American Farmland Trust, Farm to Institution New England (FINE), and numerous organizations around the region are working with farmers, institutions, supply chain stakeholders, community members, and policy makers to make these markets accessible to a variety of local farmers, especially those who have historically faced barriers to these markets.

Food hubs, small and specialty distributors, and other innovators can play a major role in developing these intermediate and institutional markets. Many small and mid-sized farms don’t have the capacity to manage logistics beyond direct farm operations – they are simply too strapped for time by the multitude of day-to-day demands, and too strapped for cash to hire outside personnel. By aggregating and coordinating the sale of local products, food hubs play a huge role in creating access to markets that farmers would have never otherwise been able to access on their own. They provide the transportation and logistics that would be untenable for most small and mid-sized farms to coordinate on an individual basis. Similarly, new technologies are being developed to digitize procurement hubs that serve these purposes just as well.

For the many decades of work that New Englanders have put in to make farmers markets more commonplace and affordable, it is time to double down on the investment in the multitude of farm-to-institution programs and policies. New England farms undoubtedly still face an uphill battle in expanding their agricultural footprint, and efforts to protect farmland, improve access to land, and support farm viability must remain front and center to local food systems planning. At American Farmland Trust we believe that farm-to-institution presents a huge opportunity for New England’s local farms to grow, and we will continue to work towards that end on all fronts.

1 Because sales are self-reported by the farms, direct-to-consumer sales represent what the end consumer has paid, while institutional and intermediated sales represent what the farmer sold - these are not necessarily the same figures.
2 State-level data is not available for Rhode Island. Unpublished state-level data is, however, included in national and regional totals.

Laura conducts research and policy analysis surrounding economic and demographic trends in farming. She is working on developing an index for regional agricultural viability in the Northeast and supporting analysis for AFT’s national Farms Under Threat initiative. Laura has farmed in Santa Barbara, managed farmers markets in Boston, and worked in the Midwest as a research analyst with Organic Valley CROPP Cooperative. She received a Masters of Science from the Tufts Agriculture, Food, and Environment program, and a Bachelor of Science in Zoology from UC Santa Barbara.